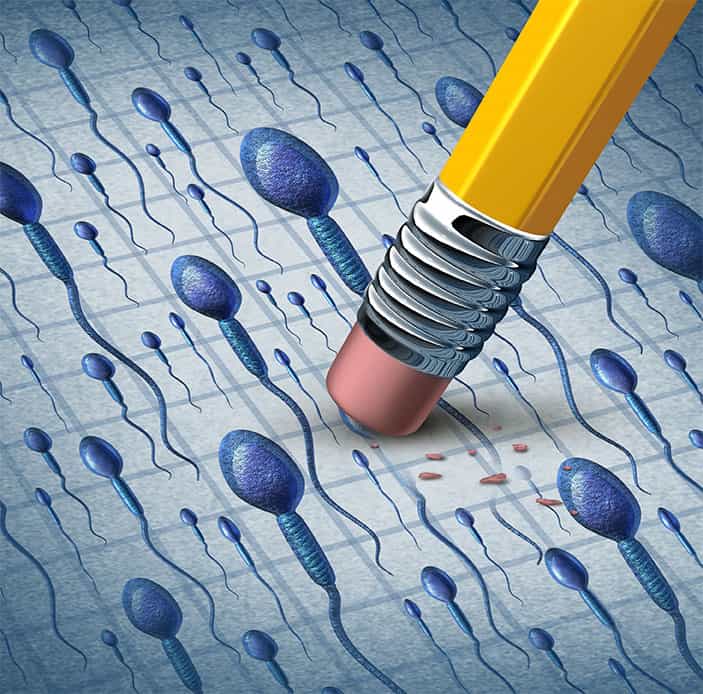 Nearly half of all men between forty-five to sixty-nine years old regularly use over-the-counter non-steroidal anti-­inflammatory pain medications (NSAIDs). Concern over this staggering statistic amplifies when considering the number of diseases traced to the side-effects of taking NSAIDs. Studies published over the last fifteen years link regular NSAID use to hypertension, gastro-intestinal bleeding, Alzheimer’s, dementia, heart attacks, stroke, hearing loss, kidney disease, and poor wound healing. Regular NSAID use consists of taking these drugs five times or more each week. Studies completed in 2011, 2017, and early 2018 also prove a link between regular NSAID use and lowered sperm counts, low T (testosterone), and erectile dysfunction. Medical communities and pharmacy shelves do not properly educate citizens about the dangers associated with over-the-counter drugs that many people consider to be safe for regular consumption.

A study published in a 2017 medical journal documented sperm quantity and quality of over 40,000 men over a 38-year period spanning 1973-2011. The results determined that these men from North America, Europe, and Australia produced sperm cells that diminished in quality and quantity by nearly 60 percent. Use of NSAIDs climbed within the same populace during that time. Another 2011 study showed that men who regularly used NSAIDs faced a nearly 30 percent higher risk of experiencing erectile dysfunction. An incorrect societal norm involves assuming female infertility when a couple struggles to conceive. Growing research indicates that instances of infertility trace back to men more frequently than ever before.

A link exists between NSAID drugs and hormone disruption which suppresses testosterone in males. Ibuprofen induces a state of compensated hypogonadism within fourteen days of regular use. In other words, ibuprofen quickly reduces the ability for the male body to produce the masculine hormone known as testosterone. The most popular NSAIDs include: alka-seltzer, Bayer, ibuprofen, Excedrin, aspirin, Tylenol, Advil, Motrin, Aleve, Bextra, Celebrex, and Vioxx. Most males consume these NSAIDs for the sake of musculoskeletal pain, primarily back pain. 85% of the population experiences recurring back pain episodes at some point in their lifetime. A study completed in 2003 showed that patients with spinal pain who utilized Chiropractic care achieved five times greater pain relief than those who used NSAIDs, and three times greater relief than patients receiving acupuncture. Chiropractic reduces the need for NSAID use and relieves pain by treating the foundational source of most back pain.

A reduction in back pain serves as one of the most common side effects of nervous system care through regular Chiropractic adjustments. Many other scientifically validated benefits also surface throughout millions of patient reports. Research, science, and clinical case evidence prove that Chiropractic adjustments reduce stress in the nervous system while improving the balance of hormones in the blood and body. The primary goal of Chiropractic does not seek to treat a specific condition. Chiropractic care focuses on improving body function by removing interference from the nervous system. Misaligned or malfunctioning vertebrae result in disease and reduced health potential. Restoring power to the nervous system generates a balance in hormones that links directly to an increase in testosterone and other endocrine system hormones. Chiropractic clinics all over the world regularly report male patients receiving help with fertility and erectile dysfunction problems.

Men often wait until a problem surfaces before facing the inevitable need for help and treatment. Chiropractic offers the opportunity for proactive health that optimizes function and benefits fertility and testosterone potential among many other health benefits. Men answer the daily call to be at their best for their work and family. Maximized potential and performance begin with Chiropractic care.